This month (?) at raptus games

It has already been a month since the last update, I’m a terrible PR person! What can I say? We’ve been quite busy, and there also may be a teensy bit of Destiny still clinging to the back of my head like a voracious space leech.

You should see my exotic dancing.

In any case! What’s new? Well our collaboration with Happy Dedo for the children’s game Happy music is now basically done, but I don’t really know when it is to be released, we will keep you posted on that matter. In the meantime, check out these legit gangsta Doves, they live to breakdance duel. 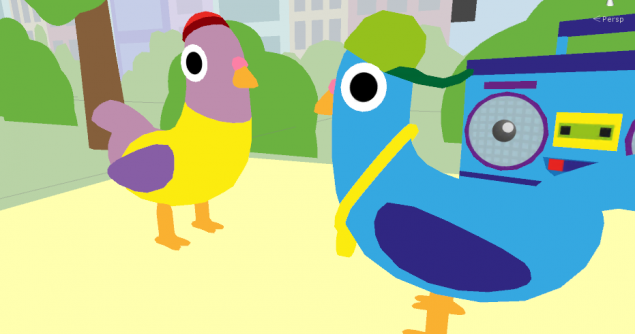 Some doves just want to feel the rhythm and get down.

The psVita explorations are going Good, Tap & Blast seems to work well in the device, even with a lot more eyecandy, bigger textures and fancier Shaders… Although there are still a number of changes that must be done before we can really push that.

I’ve also been working on some “fanart” for the awesome people at Gametrailers (I dislike calling it Fanart, because I consider it just friendly thing). Why? well I’ve found that the GT community as a whole is just awesome. And that may sound like a shallow praise, but unlike many other places online the “personalities” and the audience there are people that aren’t trolling or pontificating or insulting anyone who happens to be on the other side of some imaginary line. It’s cool.
So since I’m out of sync with Sam and my Australian friendlies, I have been dwelling over GT most days, and so this is a token of my appreciation for what they do.

WIP, as they say in the business.

(Don’t worry, there is no conflict of interest quite yet, as we haven’t really released any game that they’d cover, thanks legal team)

On the matter of the playing of games, October is upon us, which apparently means, I “invested” a whole lot of money on “videogame research“. Don’t tell anyone.